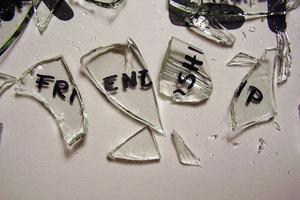 As a Leo, one of my strongest traits is my sense of loyalty: believe me, I would do ANYTHING for the people I love. BUT, there comes a time in one’s life wherein your relationship dynamics with others vastly change.


As we age, enter long-term romantic partnerships and begin to plan out our futures (careers and otherwise), we want to be surrounded by those who not only have similar interests, but also SIMILAR VALUES. We lose patience for the drama-rama b.s. and we frankly also don’t have time for it (especially when we start to pump out babies!).


In a nutshell, we want our friends to be there for us when the going gets tough, but we also want the assurance of knowing that if we cannot see or speak to them for a few months on end, our relationships will NOT fall apart over trivialities. The key therefore to maintaining mature adult relationships does not revolve around how much time is spent together, but letting the other person know how much you truly VALUE the time you do spend together.

As Aristotle pointed out in his work The Nichomachean Ethics oh-so-many years ago, there are three basic friendship formation patterns and those patterns typically (though not always) correspond with age (psychological age that is):


1) Friendships Based on Pleasure: this type of friendship provides you with enjoyable company and/or affection. In elementary school, for example, two pals may bond over nothing more than a shared love for a board game or cartoon giving them a partner with whom they can participate in recreational pursuits.


2) Friendships Based on Utility: this type of friendship provides you with access to something you desire; you may or may not even like the individual beyond what they can “get” you. For example, in highschool, friendships are often pretentious (or strategic, depending upon how you look at things) based on little beyond trying to score points popularity-wise or using someone for their partying “ins”.


3) Friendships Based on Goodness: this type of friendship is based upon a deeper bond in that you desire the person’s company because you see good in them, but also desire good for that individual in a selfless manner because of a genuine care for them. Friendships based on goodness are the definition of TRUE mature adult friendships.


As I’m sure it’s pretty self-evident based upon the above descriptions, as one’s life situation evolves their friend circle(s) typically follow suit. For instance, if you’re involved in a romantic relationship, you likely have more “couples friends” than your single counterparts. Similarly, if you’ve just embarked on your professional journey, you’ll start to meet people (with whom you likely have more in common than your school buddies) via work, networking parties and travel.


With all of this said, there will unavoidably be some painful friendship dissolutions given that not everyone grows up at the same rate…or sometimes at all. I mean, if you’ve got a spouse, kids, fancy car and career, do you really think you’ll still be hanging out with one of your highschool buddies who hit his/her peak in their teens and continues to recall their glory days in drunken hazes? I’m gonna hazard a guess and say probably not. It comes down to this: you simply no longer have the same things (hobbies nor values) in common as you’re no longer leading lives in the same direction. Let me break it down to you via a personal momento:


Remember that “trainwreck” friend of mine I was telling you about last week? I felt it only fair to relay to you the conclusion of our story. Like any dysfunctional largely one-sided relationship, it could only last so long. The breaking point for me coincided with the traumatic breakup with my fiancé (nothing like a double whammy):


When she had heard the news of our split, she rushed to my aid and attempted to build me back up, swearing that if she ever came face-to-face with him again, she’d give him a serious piece of her mind and a full-on ass kicking. Despite her apparent disgust with my ex’s philandering, a month later I discovered apparently SHE had been “dating” a MARRIED man WHO HAD KIDS and was STILL LIVING WITH HIS WIFE! What’s worse is that she was perfectly okay with the fact their dates consisted of going to strip clubs together!


She claimed he didn’t love his wife but HAD to stay with her “for the sake of the kids” (right….). I asked her to think about his wife sitting at home – how she might feel if she found out about their affair? I asked her to picture ME at home being the wife that was being screwed around on. Did that make the situation any less kosher for her to swallow?


As per my friend’s typical style, it was excuse upon excuse and allowance upon allowance. Nothing I had said or done for her throughout the time we’d known each other seemed to have made any impact. She got herself into a mess yet again and somehow justified it. Yet, couldn’t even fathom of the fact that the HELL she was now experiencing (ie: our final fight) was BROUGHT ON BY HERSELF. I knew it’d be the same old story. I knew she’d once again spin it for sympathy. If you can believe it, she actually tried to throw in MY face that my love for her was supposed to be “unconditional” and how dare I ruin our friendship over her personal choices.


As you know, I bailed her out time and time again, but the difference in this circumstance was pretty black and white: how could I reasonably accept her actions YET simultaneously reject those of my partner when they were one in the same? Wouldn’t that make me the world’s biggest hypocrite and/or pushover? Wouldn’t that make me a serious victim of what Festinger coined “cognitive dissonance”?! Indeed it would. Indeed I couldn’t. Not to mention as a feminist, I had/have some pretty serious objections to the concept of a “strip club” being an appropriate setting for a date…but I digress.


So as it were, with my engagement went one of my so-called “best” friends. But as I hope all of you have gathered at this point, ALL healthy mature adult relationships are about mutuality first and foremost. I think it’s safe to say that NEITHER my engagement nor above described friendship fit that description.
Posted by Psych Your Mind at 12:30