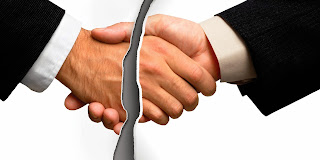 EVERYTHING (and I mean everything) in life is governed by contracts. Whether spoken or not, when we engage in interactions with each other, our responses and behaviours that are deemed "appropriate" and/or "allowed" are determined by the circumstances in which we find ourselves, along with the level of intimacy shared between ourselves and the individual(s) with whom we are communicating. In other words, how you relate to "Mommy dearest" versus a professor versus a police officer versus your best friend and so forth varies significantly... and for good (and I hope obvious) reason. As a female, perhaps the most relatable example from everyday life is seeing the difference in how your man acts when he's alone with you as opposed to when he's with his buddies. Age, too, obviously plays a role in one's interactions because in North American society, at least, it commonly serves as a means of establishing authority (e.g. the younger demographic is to respect its elders).

In situations wherein the details of the relationship and expectations of each party involved in a contract (social or otherwise) are clearly outlined (preferably in writing), there is (for obvious reasons) a lower likelihood of conflict. However, given the subjective nature of "definitions," having something in writing is not always a failsafe tactic. Once again the melodrama of my life proves illustrative:

I recently solicited the services of a photographer to take portraits of me for the cover art of my upcoming release. As part of her contract, she was insistent on giving a go at editing the photos herself, despite the fact that I am thoroughly experienced in this vein (one of my many jobs in my varied and illustrious career, thus far, was working at a funeral home reconstructing vintage images for 'In Memoriam' packages). The contract clearly stated that she was to provide me with the final shots no later than six weeks following the photoshoot and that if she were unable to fulfill my editing requirements, I would be provided with the original images.

Because she has been a friend of mine for some time (engaging in business with a friend was perhaps my first mistake!), I let it slide that it took nearly three months to get the photos into my possession. When I received them, I was shocked and appalled (to put it lightly) at the massacre job she did on my features. I don't mean to sound egotistical but I'm not exactly a 500-pound 60- year-old trying to pass for a supermodel. In other words, my editing requirements are basic and minimalistic: soften any apparent wrinkles; remove the dark circles, if visible, under my eyes; and blur out any obvious scars. Nothing more. Nothing less.

When I approached her about retrieving the original images, I did my best not to flatout offend her, but I also needed to make it clear that I was highly dissatisfied with what I had received. She tried to argue with me on numerous accounts, taking the stance that it was appropriate to pin the blame on me exclusively (excellent consumer-vendor relations, don't ya think?).

First off, she claimed that I had seen her past work and therefore should have known what to expect and that her edits were 100 per cent in line with my requests. When that didn't fly, she tried to pull the whole "it's clearly a matter of personal taste" route, with the caveat that a customer of hers cannot demand original files nor a refund based on that alone. Then, she decided I was apparently not clear enough in what I requested as far as edits go. Finally, the icing on the cake was that her photos represent her "brand" and that I paid for a service (the photoshoot), not a final product, so a refund would not be issued, even if the photos were rendered, in my opinion, completely unusable.

So why am I telling you this story? Well, as much as I'm a proponent of listening to one's heart for guidance (I am an artist, after all), there are certain circumstances in life (moreover, certain "contractual relationships") in which it is highly inappropriate to allow your emotions to get the better of you. Business exchanges, understandably, rank at the top of this list; hence, many a friendship have been torn asunder when "business" and "pleasure" have met. In other words, money changes everything AND everyone.

It's clear from my perspective that my friend is highly attached to her work as an artist. This explains her immediate defensive strategies and inability to see the shortcomings of her work. Now, I hate to sound cold, but individuals such as her frankly shouldn't be engaging in commerce exchanges because business, in its essence, comes down to a very simple logical formula wherein emotion has no place:

2) Consumer pays for service or product upon delivery

3) Vendor is to ensure consumer satisfaction and accommodate exchanges or refunds, if product or service falls short of fulfilling outlined expectations, was faulty or defective

Again, no more, no less. The rationale behind this basic equation is of course so that understandings between individuals can be upheld legally, when necessary.

While the photographer in my story, as I stated, is my friend, that relationship truly bears no relevance on the fact that I hired her for a product and upon delivery, the product was simply not up to par. I would feel the same way about the photos if someone I just met had edited them in a similar fashion. Of course, she has convinced herself otherwise… but I digress.

In sum, when it comes to matters of the heart, please listen and listen intently to the little voices in your head and the butterflies or sinking pits in your stomach, but when it comes to matters of money or legalities, the psychologically mature approach is to understand that emotions become BARRIERS to effective communication. I recommend adopting a strategy known as "zero-based thinking," namesaked by serial entrepreneur and blogger behind Preneur Marketing, Pete Williams.

In a nutshell, zero-based thinking is about stripping away everything irrelevant to the decision-making process except for the cold, hard facts and applying hindsight to establish whether you're truly making the best and most positive choices for your future and goals. Sounds familiar, doesn't it? Good old introspection in yet another form!

Beyond business, there are numerous other applications for "zero-based thinking." Another example that comes to mind is when dealing with not-so-pleasant in-laws. There are only so many times you can try to convince someone you're "good enough" for their child before it becomes nothing more than a waste of energy and a drain on your own self-esteem. In other words, this month's lesson: know when it's worth cracking a smile, shedding a tear or letting out your inner roar. More importantly, know when it's not!
Posted by Psych Your Mind at 19:21 No comments: