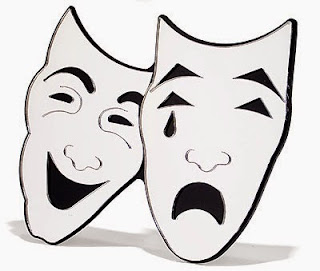 Remember when your mom used to tell you not to hold your face in grotesque positions for too long, otherwise it might stick that way? While mom may have ever-so-slightly exaggerated her words of caution (though frown lines can permanently leave their mark if said facial expression is held consistently for a lengthy period of time!), one could take the essence of this warning and reasonably apply it to psychological thought patterns.

In other words, “addictions” do not merely need to consist of physiological accommodations resulting from the regular ingestion of foreign substances. No, certain thought patterns – particularly of the negative variety – can equally become so ingrained, so habitual, that one doesn’t even realize they’ve become “stuck” in a singular mindset – that they’ve developed “pathological” thinking. This of course brings me to this month's topic of discussion: that of, “psychological framing.”

I recently pitched a new idea at work. Let me preface the rest of this paragraph by stating it’s an idea that is quite dear to my heart. While it was generally well-received, I was provided with a decent size laundry list of necessary amendments before it could potentially be formally implemented. As fate would have it, I received this “lukewarm” news over the weekend, while I was vegging out watching the comedy flick, Evan Almighty.

Now anyone who’s studied cinema or even is an avid Oscars viewer knows that 9 times out of 10, accolades are given to dramas and tragedies over movies that itch your funny bone. This bias is equally perpetuated in our educational system in that, at least in my highschool experience, the only taste of the world’s greatest writer we received revolved around his tales of misery, betrayal, murder and star-crossed lovers.

From an evolutionary psychology perspective, this makes sense: humans, given the treacherous terrain in which we found ourselves (in our primitive days), needed to have a stronger sensibility of negative stimuli in order to properly assess risks and therefore, aid in our self-preservation as a species. Believe it or not, having a pessimistic and/or paranoid perspective, at one point, was actually considered a valuable asset!

I suppose in order to continue to justify (at least on a subconscious level) why we rank tragedies supreme, we’ve developed complicated symbologies relating to media that assess ‘dark tales’ are somehow more illustrative of “universal” truths, wisdoms and experiences. We’ve convinced ourselves that despondent emotions and melodrama go hand-in-hand with the “human condition,” and that true “growth”, at least according to the world of pop culture, can only occur after deep suffering or loss.

Well, I hate to offend any aspiring filmmakers or actors, but the truth of the matter is that you can equally learn valuable lessons about others and yourself from laughing just as much as you can from crying. Humans are a complicated mess of logical and illogical thoughts, actions and motives and only considering one side of the equation will NEVER give you the full picture. But I’m not here to justify my preference when it comes to cinematic experiences ;) Just saying…

The reason I bring up Evan Almighty is because this Steve Carell comedy is actually chalked full of stunning examples of “psychological framing”; the most quintessential of which is evident during God’s discussion with Evan’s wife about the true meaning behind the Noah’s Ark tale. Allow me to explain:

At this point in the film, Evan’s wife (portrayed by Lauren Graham of Gilmore Girls fame) is feeling confused, hurt, abandoned and perhaps most importantly, unacknowledged by Evan because, despite all of the negative repercussions that are coming about as a result of his inexplicable self-proclaimed mission to build an ark, he continues to stride forward. Accordingly, Graham comes to the conclusion that the Noah story is nothing more than the tale of an individual man taking on an individual quest – perhaps because he feels he needs to “prove something”, even if it’s at the detriment of everyone else in his life. God (depicted by Morgan Freeman) however presents a very different analysis.

Given that the crux of the Noah tale revolves around the importance of saving “two” of each species to ensure future propagation, Freeman suggests it’s actually the ultimate love story, rather than one celebrating man’s “independence” or “self-serving” motivations. His character goes on to surmise that the underlying theme above all others is actually the importance of family and companionship.

Okay okay, so how on earth does any of this relate to my work situation? Quite simply, the above depiction demonstrates one of the most basic tenants of “psychological framing”, moreover “psychological maturity”: there’s ALWAYS more than one way of looking at a given situation. I could be totally bummed and feel like a failure that I essentially got a “needs improvement” stamp on my dear-to-my-heart submission that I worked my ass off on OR I could acknowledge that I must have “something” if my employer was willing to take the time to provide constructive feedback so that I can improve upon the idea for future consideration.

What I’m hoping you’ll recognize from this movie critique/academic discourse/Rose’s real life example is just how POWERFUL one’s thought processes truly are. How one is able to react to a given situation is entirely determined by how they’re willing or unwilling to “frame” it.

In Graham’s explanation of the Noah tale, she “thinks” (or frames) herself as helpless (ie: it’s an independent quest in which she has no role) and therefore “becomes” just that (ie: she’s relegated to sitting back and letting her life and family fall apart). In contrast, in Freeman’s version of the story, because companionship and the importance of being supportive toward one’s partner, even if you don’t always get where they’re coming from is emphasized, Graham is able to regain a sense of agency and feel “important” and “essential” to her husband’s mission, even if his reasoning is beyond her.

So here’s the thing: life – it never goes exactly as planned. Even when you’re sure this time, things are failsafe, it’s always a smart move to have a contingency. So while you cannot – as much as you may like to try – control the external elements or individuals around you, you most certainly can take an active role in your own life. That role begins with how you think.

You can either see challenges or opportunities for growth, dismissals or lessons to be learned, failures or the beginnings of something new. The choice is yours. Don’t underestimate or take for granted your thinking power. If you want to be a success, know you already are.
Posted by Psych Your Mind at 20:19 No comments: